4.17 (6 votes)
Pros: A fast-swinging BBCOR bat that doesn't break the bank
Cons: Some users have found that it didn't last as long as they had hoped. At this price point, some players may opt for the higher performing (but more expensive) Rawlings Velo BBCOR bat.
Rawlings is a baseball equipment company that is expert at separating the best parts of their products and creating more precise tools that players can use. A good example of how Rawlings re-engineers its own technology to give players an advantage would be the 2016 5150 BBCOR bat. This bat acts as the foundation for several other bats, but it also stands alone as a hitting tool that will help players to get the most from each swing.

At the heart of the 2016 Rawlings 5150 BBCOR bat is the 5150A alloy. This is an aerospace alloy that creates a very light and durable bat. Because the 5150A alloy is so light, it gives Rawlings the versatility to add the pOp 2.0ATM Precision Optimized Performance feature that focuses the sweet spot to wherever you make contact with the ball. The incredible give with the pOpATM feature means that you get even more release on the ball and, as a result, more distance.

Quality from Top to Bottom

The end cap on the 2016 5150 BBCOR bat features Comp-LiteA technology for improved balance and control. This is an end cap that is designed to work along with the barrel like a precision instrument to maximize the power from each hit and enhance the sweet spot.

The stiff handle is covered by synthetic leather to add comfort and more power to your stroke. The 2016 5150 BBCOR bat has technology built into the handle that pushes energy from the point of contact back into the barrel. That means that you get maximum push from your bat, even if you do not make contact on the sweet spot.

Plenty of Options to Choose From

The 2016 Rawlings 5150 BBCOR bat is a -3 bat that is available in lengths ranging from 30 to 34 inches. Hitters can choose the length and weight of bat that is most comfortable for them, and then gain more control over their swing. The 2016 5150 BBCOR bat is also perfectly balanced at the point where the handle meets the barrel, which allows any hitter to develop the perfect swing that delivers accuracy and power.

As we discussed earlier, the 5150 is the foundation design for many specialized bats that are becoming popular among Rawlings customers. From the 2016 5150, we get the 2016 Velo BBCOR bat that takes the 5150 specs and pushes them to the next level.

The 2016 Velo is made from the same 5150A alloy that the 5150 bat is made from, but Rawlings gave the Velo the new APATM Acoustic Performance technology that enhances the sound of the ping made when the bat makes contact with the ball. With the 2016 Velo, there is no question as to when the hitter makes contact and sends the ball hurtling to the outfield.

Because the 5150 acts as a foundation design, it often does not have some of the refinements that specialized bats such as the 2016 Velo have. For example, the Velo is a -3 bat that offers lengths that run from 31 to 34 inches, but it also offers a 32.5 and 33.5 inch option with corresponding weights. The ability to customize your bat based on weight and length is a little more refined with the 2016 Velo, which means that the Velo would appeal to a different type of hitter.

The engineers at Rawlings understand what baseball players want out of their equipment. That is why Rawlings will experiment with several different elements of existing products to come up with something that can be useful to players around the country. But there are those foundation products that deliver the kind of quality and performance Rawlings customers have become accustomed to.

The 2016 Rawlings 5150 BBCOR bat is certified for collegiate and high school play, and has been the inspiration for several other Rawlings bats. With its space age 5150A alloy at the center of its design, the 5150 is a lightweight bat that can take the punishment a baseball season gives out. When you want a bat that is reliable and a great tool to use to learn the ideal swing, then you want to look into getting the 2016 Rawlings 5150 BBCOR bat. 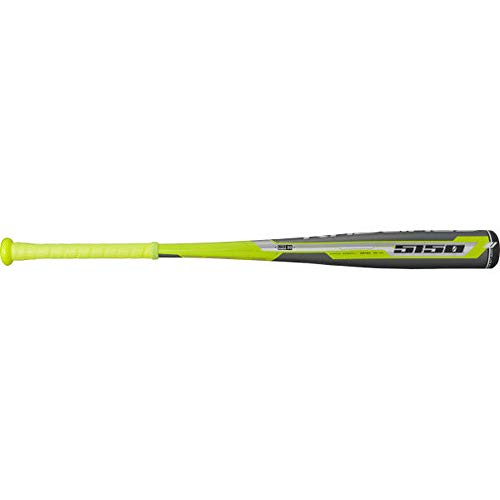